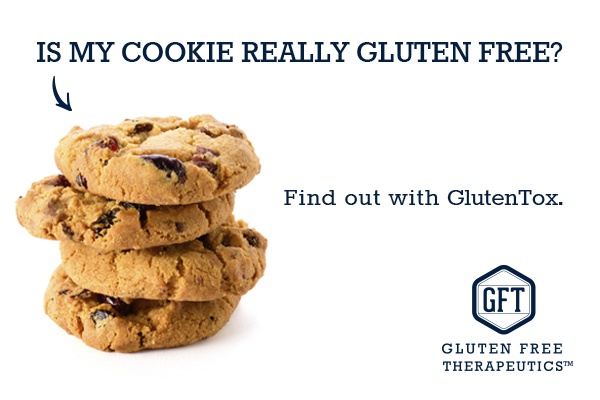 Have you been wondering if those delicious “GF” cookies your neighbor made you are really gluten free? We all have a helpful friend or family member that bakes us gluten free goodies. We want them to be gluten free, they look great but how can we tell? Even if food is made from GF ingredients it can be contaminated in the making. Cross contamination and inaccurate food labels is a huge concern in home kitchens. Some highly sensitive celiacs can react to the smallest traces of gluten peptides lingering on surfaces, in food or even in the air.

So how can you know how safe your food is? With celiac disease guessing is not good enough. Any gluten is too much gluten. The damage ingesting gluten can cause plus the discomfort it creates is just not worth taking a chance. Gluten causes an autoimmune reaction that destroys the intestinal lining. Untreated celiac disease can lead to long term health issues that can be avoided if gluten is properly eliminated. Testing for gluten in our homes and workplace is a great way to protect ourselves from the dangers of cross contamination.

We, at GFT, looked for a way to take the guesswork out of gluten detection at home. We have a highly sensitive celiac in the family and are constantly vigilant about controlling gluten exposure. We tried several test kits and reviewed the science behind them.

We found GlutenTox and are so impressed we decided to make it available to our customers. We are currently offering the Home test kit on our website. Each kit contains five tests making it easy to test multiple foods.

“We have never offered or recommended any products other than our own. In reviewing this gluten test kit and learning about the science behind it we are very proud to offer it to our CeliVites customers. It meets our standard of excellence for efficacy and ease of use.” Says Leigh Reynolds, President of Gluten Free Therapeutics.

The GlutenTox kit is more sensitive in its detection of the most important portion of the gliadin molecule. 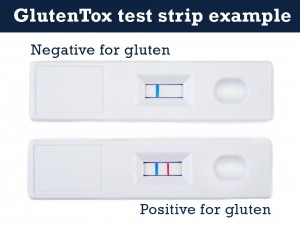 This gluten test kit differs from those available because the antibody working inside detects the toxic component of gliadin, that portion of the gluten protein demonstrated to provoke a reaction in celiac patients. This toxic portion was identified in 2002, the finding was subsequently published in the journal Science. This is an advantage over other antibodies working in other commercially available ELISA test kits, which were not raised against this toxic portion specifically, so that if the most toxic portion of the protein remains in processed foods, it could be missed by these other testing kits. This toxic portion of the gliadin molecule, or peptide, is 33 amino acids long, called a 33-mer. The antibody raised against this 33-mer was dubbed G12 by the developers of the GlutenTox kit. Here is what they had to say about G12.

The G12 antibody, located inside the test strip, is specially designed to seek out the 33-mer peptide of the alpha-gliadin molecule. Studies show this peptide is the primary cause of the auto-immune response in celiac patients. A 33-mer peptide was identified that has several characteristics suggesting it is the primary initiator of the inflammatory response to gluten in celiac patients. A food will test positive with GlutenTox if it contains these toxic peptides. G12 is able to recognize gluten in wheat, barley, rye and oats. It is also uniquely well-suited to detecting gluten in hydrolyzed, fermented, or otherwise processed foods.

This means that while the other test kits recognize several fragments, including the toxic portion besides other, non-toxic fragments of the gliadin molecule, the G12 antibody hones in specifically on the toxic fragment, so the most important fragment to the celiac patient is not diluted out. The GlutenTox kit is therefore more sensitive in its detection of the most important portion of the gliadin molecule.