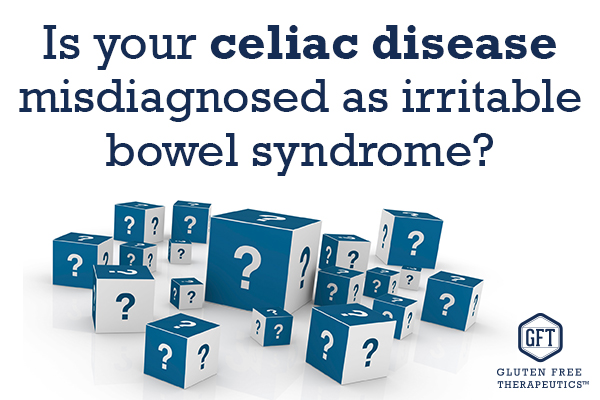 As many as 16 percent of people with celiac disease are misdiagnosed as having irritable bowel syndrome (IBS) before finally receiving a correct diagnosis of CD, according to a 2013 study from researchers in the United Kingdom. This represents a 4-fold increase over a matched control group without celiac disease. Ignoring an official diagnosis and focusing instead on standard treatments for IBS, the researchers found that 28% of patients with celiac disease had been previously treated for IBS while only 9% of the controls received this treatment. The authors state, “Many of the diagnoses of IBS occurred within the last year before diagnosis of celiac disease, but there was a clear excess of IBS even 10 years earlier.”

Celiac patients’ care is delayed
That’s potentially 28 percent of CD patients whose care is delayed an average of 3 years until a doctor eventually makes the right call. In the meantime, the body’s immune system continues to attack the tissues of the small intestine, cause damage to the absorptive villi, and wreak havoc on other systems that depend on the small bowel for nutrients leading to serious nutrition deficiencies.

The problem with diagnosing CD, or rather with not misdiagnosing it as IBS, arises from the fact that the two conditions do have very similar symptoms. And some studies have suggested that the two conditions may coexist in some patients. For instance, a Polish study found that while some IBS patients who tested positive for celiac disease experienced symptom resolution after following a gluten-free diet (implying these patients actually had celiac disease and not IBS), a few remaining patients experienced only partial relief, which the researchers said suggested a comorbidity comprising both conditions.

Syndrome vs. Disease what is the difference?

The biggest difference between IBS and CD is that IBS is a syndrome, not a disease. What’s the difference? A disease has a known cause as well as quantifiable effect on the anatomy. Syndromes, on the other hand, have no single definitive cause and their effects on anatomy aren’t easy to measure, at least not with the same sort of cut-and-dry analysis of a disease. While syndromes pretty much are associated with the symptoms they cause, a disease is associated more strongly with the permanent or long-term physiological consequences. For instance, while IBS may have many of the same symptoms as CD, it does not cause changes in the physiology of the digestive system – e.g., destruction of the small bowel.

It’s true that gluten can and often does cause gastrointestinal symptoms in people with IBS, including some of the same symptoms that can occur with CD; however, IBS only exists when there are GI symptoms, while CD can occur even without any GI symptoms being present.

Why is it important to distinguish between the two?
The most important reason to insist on a definitive diagnosis if you are suffering from IBS but suspect you may have CD is that treatment and prognosis of the two conditions are different. CD requires strict, lifelong adherence to a gluten free diet. Following a gluten free diet may appear to be simply a matter of convenience, i.e. “can’t I just avoid gluten containing foods?”. The answer is no, cross-contamination of foods prepared in manufacturing plants and restaurants is quite common and those with celiac disease must constantly survey their environment for potential risks. Having celiac disease is also potentially socially isolating and non-adherence to a gluten free diet in those with celiac disease can result in life-threatening complications. For these reasons, it is important to get an accurate diagnosis of celiac disease if you suspect you have it rather than placing yourself on a gluten free diet without the assistance of the medical community.

Getting the Right Diagnosis

We know the importance of an accurate diagnosis but getting one can be problematic. One way to tell the difference between IBS and CD is to determine if you also suffer from symptoms like joint pain, osteoporosis, anemia, or another auto-immune disorder, all of which commonly occur with CD. But the best way is with a blood test and, definitively, a small bowel biopsy. Like most medical tests, biopsies are not inexpensive, and getting a doctor to agree to one can be difficult unless your blood test shows an abnormal level of auto-antibodies associated with celiac autoimmunity. Most importantly, if you have symptoms of IBS or you’ve been diagnosed with the condition, it is not recommended to go on a gluten-free diet if you want to be tested for CD in the near future. Avoiding gluten can cause your blood tests to come back with a false negative, which can also delay your diagnosis. In order to allow a proper diagnosis, it is better to your tests done prior to eliminating gluten.

In Summary
Up to 28% of people who have celiac disease are first treated for IBS. Symptoms of IBS during the prodromal period delayed accurate diagnosis by three years. A delayed or incorrect diagnosis leads to unnecessary intestinal damage that can result in serious nutritional deficiencies, and secondary malabsorptive related conditions (for example anemia, osteopenia, peripheral neuropathy).

If you have been diagnosed with IBS but suspect you have celiac disease it is important to discuss this with your medical professional.