Home > Living Gluten Free Blog > Medicine & Research > Can celiac disease be the cause of migraines? 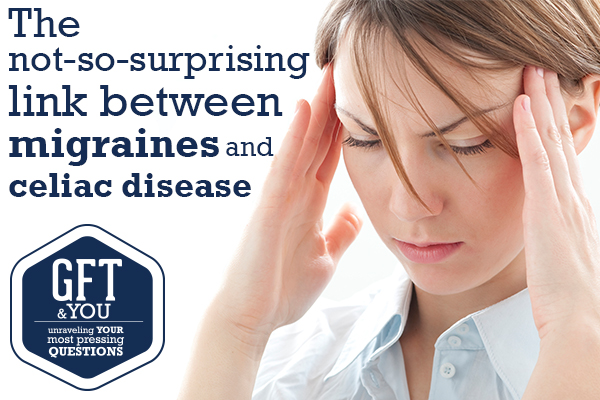 Anyone who’s ever had a migraine knows there’s no mistaking it for a common headache. Migraines are typically associated with more intense pain as well as other symptoms, such as increased sensitivity to light, sounds or smells and even nausea and dizziness. There are several underlying mechanisms that can cause migraines to develop, and one of those causes is celiac disease. In fact, one study found migraines are 10 times as likely to occur in people who also have celiac disease; in another study, 30 percent of celiac patients reported symptoms of migraines.

The findings aren’t all that surprising: Several studies dating as far back as the 1960s have linked celiac disease with neurological disorders, including ataxia, neuropathy and depression. While the association between celiac disease and migraines has been demonstrated, researchers are still not sure why migraines – and, in fact, all kinds of headaches – are more common in people with CD than in the general population. One theory is that the same autoimmune response that attacks the lining of the small intestine also attacks the protective membrane covering the nerves or even the brain cells themselves. Another theory maintains that the inflammation that occurs in celiac disease may be more widespread than previously thought, affecting the nerves and brain as well as the small intestine.

In addition to discovering a higher prevalence of migraines among those with CD, what these studies have also found is that when these people begin adhering to a strict gluten-free diet, their headache symptoms tended to resolve. Anyone who’s been diagnosed with CD knows the importance of following a gluten-free diet, but sometimes, adhering to what appears to be a gluten-free regimen isn’t enough. That’s because many important nutrients that are normally absorbed by a healthy small intestine can no longer be well-absorbed in people with CD. As a result, other symptoms related to nutritional imbalances can occur.

CeliVites from Gluten Free Therapeutics was specifically designed to avoid cross-contamination and to increase the bioavailability and absorbability of nutrients, making them the ideal supplement choice for people with CD or gluten intolerance. Founded by a mother of an adult child with CD, GFT is committed to providing nutritional alternatives to help people with CD lead healthier lives. See the complete line of CeliVites here.