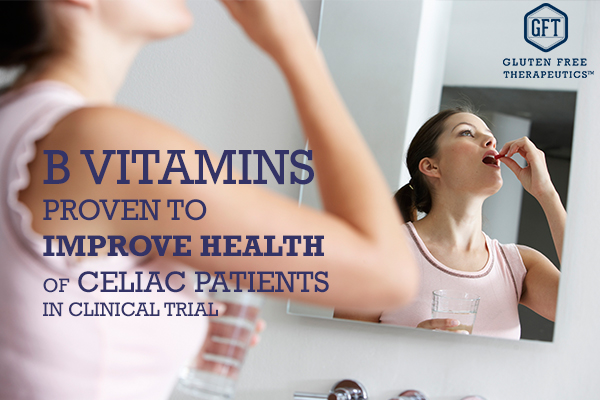 People with celiac disease and following a gluten-free diet faithfully are prone to vitamin deficiency and lackluster health, including general feelings of fatigue and malaise. It is not uncommon for feelings of anxiety and depression to occur.

A clinical trial has revealed that B vitamins improve the health of celiac patients who are following a gluten-free diet. B vitamins, which play an essential function in cell metabolism, are known by other names, including cyanocobalamin, folic acid, biotin, pyridoxine, pantothenic acid, niacin, riboflavin, and thiamine.

Study Background
A team of researchers, led by Drs. C. Hallert, B. Hultberg, M. Svensson, and J. Tholstrup, endeavored to understand the benefits of vitamin B supplements for patients who have celiac disease.

The study, which was designed to determine the clinical and biochemical effects of vitamin B supplements on adult patients who were long-time sufferers of celiac disease, appeared in the April 2009 issue of Alimentary Pharmacology and Therapeutics (Volume 29, Issue 8).

Study Methodology
As a double-blind, clinical placebo-controlled study, it involved 65 adults, 61% of whom were female. All participants had been following a strict gluten-free diet over the course of several years (8-29 total years with a study average of 15.5 years gluten-free).

For six months, one group of patients received a vitamin B supplement that contained 0.8 mg of folic acid, 0.5 mg of cyanocobalamin, and 3 mg of pyridoxine, while another group received a placebo.

Once the trial period ended, doctors judged the effectiveness of the vitamin B supplements by measuring the biochemical effects (through total levels of plasma total homocysteine or tHcy, a vitamin B status indicator), and the psychological well-being of participants (PGWB index).

Summary of Study Results
On both a biochemical and psychological level, the study results were quite impressive for those using vitamin B compared to the placebo group.

Biochemical effects of B vitamins.  The researchers noted that patients on a strict gluten-free diet for several years had elevated levels of tHcy. At the beginning of the study, the baseline plasma tHcy level was 11.7 micromoles/L, which was notably higher than the base levels of 10.2 micromoles/L found in the control group. However, the plasma tHcy dropped by 34 percent among those taking vitamin B supplements to a level that was significantly lower than those who were taking placebos.

Psychological effects of B vitamins.  After taking vitamin B supplements for six months, the PGWB index rose from 110 to 113. The most notable changes occurred in patients who were experiencing some degree of anxiety or depression prior to the beginning of the study. The scores of those who initially presented as moody, depressed, or anxious were normalized after 6 months of B vitamin supplementation.

Gluten Free Therapeutics’ CeliVites nutritional supplements are developed specifically for people with celiac disease. Using the science like the clinical trial evidence above they created formulas based on the documented deficiencies commonly found in celiac patients.  CeliVites are meticulously formulated for maximum absorption and superior bioavailability for optimal health. The CeliVites line of supplements provides the most needed ingredients in their most effective form. And of course are batched tested to be free of gluten.